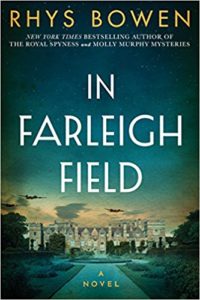 In Farleigh Field
by Rhys Bowen

“World War II comes to Farleigh Place, the ancestral home of Lord Westerham and his five daughters, when a soldier with a failed parachute falls to his death on the estate. After his uniform and possessions raise suspicions, MI5 operative and family friend Ben Cresswell is covertly tasked with determining if the man is a German spy. The assignment also offers Ben the chance to be near Lord Westerham’s middle daughter, Pamela, whom he furtively loves. But Pamela has her own secret: she has taken a job at Bletchley Park, the British code-breaking facility.

As Ben follows a trail of spies and traitors, which may include another member of Pamela’s family, he discovers that some within the realm have an appalling, history-altering agenda. Can he, with Pamela’s help, stop them before England falls?

Inspired by the events and people of World War II, writer Rhys Bowen crafts a sweeping and riveting saga of class, family, love, and betrayal.”

This is a deeply intriguing story that will delight both historical fiction readers and mystery enthusiasts. It is fast-paced with plausible events and entirely natural (flawed) characters. With all the rave reviews, I knew going into this one it would enjoyable, and it did not disappoint.