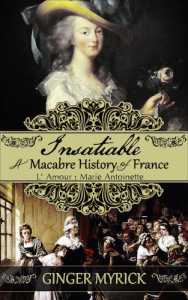 French Revolution meets Walking Dead in this alternative history mash-up by a prolific author who has explored Renaissance Iberia, Medieval Wales, 19th Century New York and the American Civil War in her previous novels: El Rey, The Welsh Healer, Work of Art, and But for the Grace of God

Following Marie Antoinette from her happy childhood as the Empress of Austria’s youngest daughter, through her difficult transition from archduchess to dauphine and finally to Queen of France, readers are immediately aware of a sinister undercurrent in the historically accurate narrative. France is harboring a terrible secret within its borders–concealed since the time of Catherine de’ Medici. Against her husband’s dying wishes, the Holy Roman Empress forged the alliance with France that sent 14-year-old Antonia to this dangerous and peculiar court, where strange etiquette, outrageous styles and thickly coated make-up are not simply fashion statements. Our protagonist must find her way through Versailles’ long-established rituals, woo a reluctant husband and accomplish her main duty of producing an heir.

Marie Antoinette’s shy and standoffish bridegroom is one of the story’s unsung heroes–a refreshing portrayal–and her famous love affair with Axel von Fersen is played out brilliantly. The mort-vivant aren’t the only adversaries along the way–Madame du Barry and some of the King’s relations enjoy causing trouble as well. Add political intrigue and romance to the mix, and this historical horror novel is indeed an engrossing, cross-genre tale. The only complaint I can imagine is that there is an abridgment of Revolution details near the end, but it simply would not have been possible within the almost 400 pages. For readers not into the horror scene, I can attest that it’s not too gruesome–tastefully done would be an excellent pun (and rhyme!)

Once again Ginger Myrick has proven her talents with yet another style, bringing her tally to 5 within two years, including history, romance, fantasy, mystery and horror!

“In 1770, fourteen-year-old Austrian archduchess, Maria Antonia, left her homeland to marry the most sought after prince in Europe. Upon stepping into France she became Dauphine Marie Antoinette and assumed a fairytale life would follow.

But being the Queen of France is not all masked balls, beautiful dresses, and extravagant living. There are horrifying and unnatural forces at work behind the scenes, a mysterious plague causing a sinister transformation in the residents of Paris. When Marie Antoinette learns the details, she is stunned to find out that France has kept the secret for over two hundred years, and now she will be burdened with one of her own.

Determined to be the obedient daughter of the iron-willed Holy Roman Empress, she agrees to fulfill her commitment to the French Crown, until she unexpectedly falls for the handsome Swedish count, Axel von Fersen. Torn between her husband and her true love, her duty and her desire, Marie Antoinette longs for the day when she can be free to choose her path and follow her heart.”