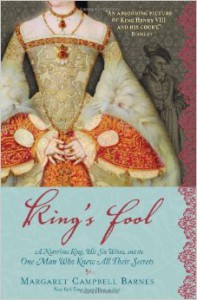 Another great novel from this author! I really enjoyed her book My Lady of Cleves, though found the one on Anne Boleyn, Brief Gaudy Hour, had a sketchy timeline and depicted Anne as I hate seeing her: shallow and evil.

This is the story of the life of Will Somers, royal jester to Henry VIII. I would liken this book to The Autobiography of Henry VIII by Margaret George, though more abridged and it has a little more to do with Will’s life rather than Henry’s. They both show Henry in a positive light and make his decisions seem more rational than the topical history suggests.

Will starts life as the son of a churchman and has learning, though his family is poor. He secures a position in an affluent merchant’s household as clerk and meets the lovely daughter, Joanna. He does have personality and antics here and there, though they don’t come to royal notice until he accompanies his master to court, where he apes the noblemen and catches they eye of the king. Through all six wives he is beside his king, not only as jester but also his friend and confidant.

I like how this novel ties in with the previous ones I read, though, again, not Anne Boleyn’s character. But others I did enjoy, such as the Lady Mary, Hans Holbein and Anne of Cleves. There is just the right balance of Will’s life as jester and his life as himself, Will Somers the former clerk of Easton Neston.

This story has everything I like in a historical fiction novel: solid characters (not too good or too bad), a good plot (how can you go wrong with Henry VIII and his wives?), great wording and diction (not overly antiquated or too modern) and historical accuracy. I am quickly becoming enamored of this author’s writing!