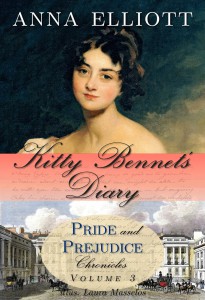 Catherine “Kitty” Bennet may be Austen’s nondescript sister, but has been reinvented in this continuation as a heroine both witty and brave, and on a mission to find a husband for Mary. In Elliott’s previous novel (Volume 2) Kitty had lost her fiance in the Battle of Warterloo, witnessing the carnage personally and nursing the wounded soldiers. Deeply affected, Kitty grew up quickly, no longer resembling the silly girl who followed Lydia’s lead.

Not only does this version of Kitty present a different character than ever imagined, but Mary takes a break from being completely insufferable as well, and offers some surprising adventures. Jane makes an appearance with a problem of her own, and Georgiana is Kitty’s accomplice in teaching Bingley’s interfering sister a lesson. Austen’s afterthoughts on the future of the characters of Mary and Kitty have them married off to a clerk and a rector, and this is pleasingly explored in the story.