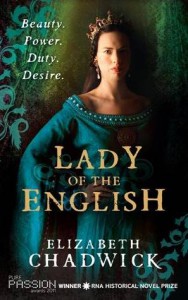 Lady of the English

When his only son perished in a shipwreck, Henry I was forced to look elsewhere for England’s next monarch. Marrying a much younger woman did not produce another heir and so he began to weigh his other options: his nephew (son of his sister)–weak and already surrounded by factions–or his daughter, the strong willed and intelligent Empress Matilda.

Since Matilda offered the chance of continuing his direct line, he married her off to the young Count of Anjou and waited for a grandson to raise as his heir even while promising Matilda the English barons would support her cause should she become queen before her son was of age. Though Matilda did produce the future Henry II, on her father’s death her cousin Stephen snatched the crown with the help of the influential men of the country. Matilda found she must fight those who had sworn fealty to her in order to regain her rights and ultimately her son’s crown.

This story is told by Matilda, who was an Empress before again becoming a political pawn for her father, and by Henry’s second wife, Adeliza. Though Matilda had been sworn as Henry’s heir, those who would be loyal to a woman–especially one married to a powerful foreigner–were few. Adeliza’s story lies in her second marriage, when her faithfulness to her step-daughter was pitted against her husband’s loyalty to Stephen.

As always Elizabeth Chadwick offers a detailed and very readable medieval era novel full of political intrigue and fascinating depictions of the people surrounding the throne of England.