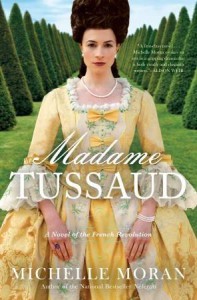 Chronicling the famous wax figure maker’s years in France during the French Revolution, this novel gives a panoramic view of the Reign of Terror from a unique perspective.

Marie Grosholtz had been primed from a young age to take over the family business–an entertainment enterprise based on life-like figures of famous and infamous people. This attraction drew crowds because for some it was the only way they could see the royal family, but later displayed the latest news from the influential men and women of the newly established government–in a much more realistic manner than the politically charged articles in circulation. During the early 1790?s, with news coming in daily, Marie worked tirelessly to display new tableaux depicting the changing times. Though this proved profitable, it became necessary, as it was an outward display of the family’s support of liberty.

Marie, however, had a leg in each camp–she was tutor to the King’s sister, even with the royal family imprisoned, while hosting salons that brought none other than Robespierre, Marat, Danton and other famous leaders of the French Revolution into her home. Her own view–an understanding of the ideals that began the revolt against the monarchy mixed with horror at how it was playing out–she cleverly kept to herself, until the violence struck too personally. Many of the men and women who were so very passionate about bringing liberty to France became victims of the angry mobs during the Reign of Terror, and Marie found herself caught up in undesirable circumstances and ultimately condemned by the leaders who had previously counted her a friend.

As a novel of the French Revolution, I found this to be just the right balance between readability and historical accuracy. It’s not overly detailed, but gives enough information for even a reader new to the era an understanding of people and events. For those interested in further reading I recommend Annette Vallon by James Tipton, the Josephine B. Trilogy by Sandra Gulland and The Queen of Diamonds by Jean Plaidy (which is centered around the Diamond Necklace Affair, Marie Antoinette, and several characters mentioned in Moran’s novel).