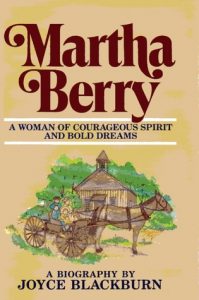 Martha Berry: A Woman of Courageous Spirit and Bold Dreams
by Joyce Blackburn

This young adult biography was first published in 1968 and reissued in 1986 with photos and an author’s postscript. Martha Berry was the founder of The Berry Schools (later called Berry College) in Rome, Georgia. She had an early interest in the “mountain people” at the foot of the Appalachian mountains in Northwest Georgia. She noticed they lacked any sort of schooling and she meant to change that. With the land that her father had passed on, she built first a boy’s school and later a girl’s school with the motto, “Not to be ministered unto, but to minister.” The students would work and learn at the same time. Though the school struggled and went through many changes during the early 20th century, it went on to become one of the top colleges in the country.

There are few books available on Martha Berry, and what seems to be the premier biography is titled Miracle in the Mountains by Harnett T. Kane with Inez Henry. I’ve read about a fourth of it, and it does seem to offer many more details, but at the cost of being less readable. Blackburn’s succinct version covers all the bases and highlights the most interesting aspects of Berry’s accomplishments. In particular, the life lessons and hardships are pitted with Miss Berry’s indefatigable nature and good sense. One might think there would be an abundance of religious themes within the pages, but in reality it is shown that while Martha Berry’s faith was strong and well-defined, she was–like her father before her–unfailingly kind to everyone of all faiths and backgrounds, and her main focus was on learning and making oneself useful.

I grew up in and around Rome, GA and I used to work down the road from Berry College (at Mount Berry Mall), and so I have been aware of the great lady from an early age. I did not, however, know that she met many famous people during her lifetime–indeed she sought them out for donations. The list includes Theodore Roosevelt, Henry Ford, and Andrew Carnegie. Her elder sister married an Italian count, and lead an interesting life. Although noteworthy, these things are not what makes Martha Berry such a fascinating person. It’s her dedication to those less fortunate and her methods of helping them to help themselves that makes her so admirable.

Blackburn’s biography is highly recommended, and I look forward to a fiction writer one day taking on this incredibly generous and forward thinking woman!

1 thought on “review: Martha Berry: A Woman of Courageous Spirit and Bold Dreams”