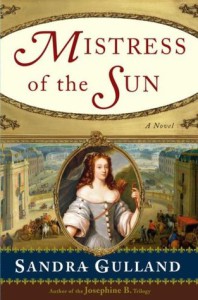 Mistress of the Sun

Louise de la Valliere, nicknamed Petite for her small stature, is just a child of six when she delves into the black arts to calm a wild horse. Not knowing the repercussions of such an act, her life takes a downward turn as her beloved father dies a mysterious death and her hopes of joining her aunt at a convent are quelled by her mother’s ambitious second husband.

Serving as waiting maid to Marguerite, a princess of the blood, she finds friends and solace through horses once again. A chance meeting with the king interests her in the exciting life at his court — one she never expected. She soon stands out as a horse charmer and hunter, a perfect match for young Louis.

They must keep their relationship secret, for the Queen Mother frowns upon any act that may upset the people’s view of their gallant king. After four pregnancies and many trials in their relationship, Petite must find a way to hold the king or let him go.

I was not as impressed with this novel as the Josephine B. trilogy. The writing style is similar — common details you don’t find in many books (use of privy, eating habits, ailments) are described and give it a down-to-earth atmosphere, but I don’t feel Petite was well-rounded enough as the protagonist. She didn’t have enough strengths to be a true heroine. The story, however, was interesting and suspenseful and the setting accurately described. It is a worthwhile read for fans of the history of France and its eccentric kings.