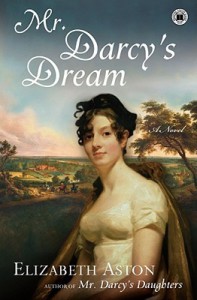 “All men say [they will be faithful] when they marry; they say that when it is May and the sun is shining and their hearts are full of love. But what happens in the dog days of August, or when Autumn winds begin to blow through the matrimonial home?”

Such is the theme of this amusing, if unimaginative, Pride & Prejudice continuation. The one factor that sets it apart from other Austenesque novels I’ve read is that the author does not use any of the original characters except by mention. The premise of Mr. Darcy’s Dream is the building of an immense modernized greenhouse, along with other changes to the garden and landscape of Pemberley, supervised by his niece, Phoebe (daughter of Georgiana), while the Darcys’ are on holiday in Europe.

Phoebe and the Bingleys’ daughter, Louisa, have shunned the London Season to spend what they thought would be a quiet and enjoyable respite at their childhood escape. Enter several gentlemen, an unladylike governess and a detestable aunt, Lady Redmond–who makes Catherine de Bourgh seem charming–and the two young ladies find their haven invaded by undesirables.

Both Phoebe and Louisa have more than one suitor, and with the niceties demanded by etiquette, find it difficult to extricate themselves when social situations require conversation or dance with certain parties.

I had a problem deciphering the family connections of the characters at first, and this could be because Mr. Darcy’s Dream is part of a series of which I’ve not read the previous books. However, it comes together soon enough and despite a host of new ‘faces’ to the world of Pride & Prejudice, there is still a great amount of Austen charm.

Other books in this series:
Mr. Darcy’s Daughters
The Exploits & Adventures of Miss Alethea Darcy
The True Darcy Spirit
The Second Mrs. Darcy
The Darcy Connection