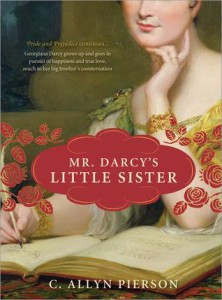 This Pride & Prejudice continuation begins just after the Darcys’ wedding and though not entirely in her perspective, is focused on Georgiana’s coming out year and hopeful wedding plans thereafter. A few new characters are introduced with the usual cast, and the storyline is full of plots, intrigue and humor. Georgiana at first is very shy and awkward, but after a very trying occurrence, begins to find her confidence and truly becomes the heroine of the story. Elizabeth normally plays this role, but she is swept into the background by this new Georgiana.

During her coming out year—presentation at court, parties and other social events—Georgiana is determined on gaining the acceptance of Elizabeth with the women who view her as a social climber unfit for their company, while deftly extricating herself from the notice of male fortune hunters. She has her heart fixed early on, even if she herself doesn’t know it, but she does know that she wants a love match like her brother.

This is a rather long Austen continuation at more than 400 pages, but is fast-paced enough to hold the reader’s attention. There are few surprises when it comes to characterization—no sudden personality changes that would offend Austen purists. Georgiana’s eventual blooming comes about naturally enough. The story is not in diary format, but includes a few entries as well as letters from various persons. Those who enjoy royal fiction will relish a few scenes with the Prince Regent, who offers a bit of political intrigue to the mix.

Overall a satisfying read, it is a little predictable, but that makes for great comfort reading for Austen enthusiasts. The period details are clearly the product of in-depth research and the style is not unlike the original. This is definitely a great read for those who wish to delve further into the character of Georgiana Darcy.