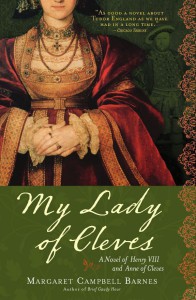 My Lady of Cleves

This book begins with Henry VIII’s search for a fourth wife and ends with his death. Though her earlier life was not covered in great detail, the reader still gets a sense of who Anne of Cleves was and how her personality developed. Since being painted by Hans Holbein, Henry VIII’s court painter, and chosen over her more attractive sister, she began seeing herself differently and gained the confidence needed to overcome the great culture shock she suffered when arriving in England. Historical fact is vague on precisely how and why Henry did not want to continue the marriage, and I think Barnes has envisioned a scenario that may well be very accurate. I was surprised to find Holbein used as a supporting character, but it fits nicely with the timeline of Anne’s arrival and his artwork. Archbishop Cranmer is a likable character, as is Mary Tudor and several others that are rarely featured favorably in historical fiction. I am very surprised that this book was written in the 1940’s; it has a modern feel to it. Novels on the lesser known wives are hard to find and I think anyone interested in Anne of Cleves will really enjoy this read.