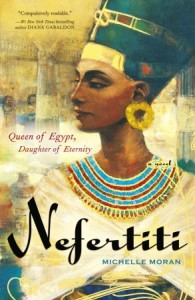 Sisters Nefertiti and Mutnodjmet of Egypt have a relationship similar to that of another famous pair: Anne and Mary Boleyn. Nefertiti, calculating and ambitious, becomes the chief wife of the young and impetuous pharaoh Akhenaten, while ‘Mutny’ stands in the shadows and plays handmaiden to her sister. As she approaches marriageable age, Mutny begins to resent her position and is wary of the new religion that Akenaten is forcing on the people of Egypt. She begins mapping a life away from court, though her sister continues to yield great power over her.

Egyptian history has never really intrigued me as European history has, but I found this novel to be quite an interesting read. The way of life is so foreign, but the characters have timeless personalities and the fascination of the age-old problems of politics and religion always make a great story. I was quite satisfied with the ending, however the author has written a sequel called The Heretic Queen, which is based on the later life of the character Mutny.

BOOK DESCRIPTION FOR THE HERETIC QUEEN:

In ancient Egypt, a forgotten princess must overcome her family’s past and remake history.

The winds of change are blowing through Thebes. A devastating palace fire has killed the Eighteenth Dynasty’s royal family–with the exception of Nefertari, the niece of the reviled former queen, Nefertiti. The girl’s deceased family has been branded as heretical, and no one in Egypt will speak their names. Nefertari is pushed aside, an unimportant princess left to run wild in the palace. But this changes when she is taken under the wing of the Pharaoh’s aunt, then brought to the Temple of Hathor, where she is educated in a manner befitting a future queen.

Soon Nefertari catches the eye of the Crown Prince, and despite her family’s history, they fall in love and wish to marry. Yet all of Egypt opposes this union between the rising star of a new dynasty and the fading star of an old, heretical one. While political adversity sets the country on edge, Nefertari becomes the wife of Ramesses the Great. Destined to be the most powerful Pharaoh in Egypt, he is also the man who must confront the most famous exodus in history.