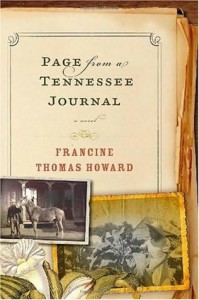 Page from a Tennessee Journal

Tennessee, 1913. Annalaura Wells is struggling to feed her four children after her husband takes their money and leaves without a word. Months pass as the family desperately tries to work their sharecropped tobacco farm. A bad harvest, combined with less hands to work the land bring trouble when the landowner, Alexander McNaughton, discovers the situation. His interest in Annalaura, however, trumps the lost profit on the crop and she finds she has no choice but to give in to his demands if she is to provide for her children.

Meanwhile, John Wells is making a tidy sum working a poker game in Nashville. Though his true desires and intentions are lost on Annalaura, he eventually returns to find his family usurped by his one-time employer. Endeavoring to keep both men from harm, Annalaura must make an impossible decision for the futures of all involved.

This is an affecting story that portrays life during racial segregation in the South, and to a sharper degree the roles of women, black and white. McNaughton’s wife narrates much of the story, revealing her plight to be just as heartbreaking as that of her completely powerless rival. With a satisfying, though open ending, the author has expressed interest in continuing the story in a sequel. I found the unabridged audio version to be pleasing and emotional, and a welcome deviation from my usual historical reads.