I’ve decided to break this into parts, since it’s a hefty book and I’d like to give an extensive review. Chapters 1 through 4 are included in this first part. 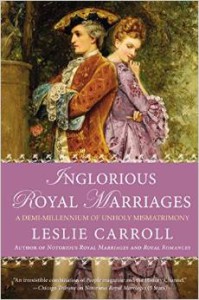 Henry & Margaret’s marriage starts off badly when her impoverished father fails to provide a dowry or any other financial or political gains through their union. In fact, England lost rights to parts of their hard-won land in France as a result of the marriage. As the simple-minded Henry went in and out of madness, Margaret gained the ire of the English with her presumptuous running of the country, alienating of certain Lords, and, as many would say, giving England a bastard for an heir. Through a tumultuous few decades the people swayed back and forth from Lancaster to York with numerous skirmishes and battles, finally ending with the Yorkist King Edward IV on the throne.

Carroll’s summary of the events leading up to and consisting of the Cousins’ War (The Wars of the Roses) neatly explains the details of the origins of the arguments for both houses descended from Edward III. Fair documentation is given, along with an explanation of known biased sources.

Margaret Tudor’s heirs eventually claim the throne of England when Elizabeth I dies childless in 1603, but it wasn’t a pleasant road for Henry VIII’s oldest sister. Her decade-long marriage to James IV left her perpetually pregnant while only one child survived to adulthood. He also foisted his illegitimate children on her household and was flagrantly unfaithful. This would continue with her second and third marriages to various Scotish Lairds. Of her second marriage, she produced a daughter, Margaret Douglas, who was raised at the English court. Her third marriage, and an even bigger disaster, left her penniless as her husband collected her revenues to fund his own lifestyle, living with his mistress and future wife. While Margaret Tudor is to be pitied by our 21st century sensibilities, she made the choices within her limited grasp, and in retrospect, they were not for the best. Her plight eerily parallels that of her granddaughter, Mary Queen of Scots, who also married a Prince/King, followed by two failed marriages to Scottish Lairds and a single infant on throne of Scotland.

Carroll’s abridged version of the eventful life of Margaret nonetheless gives readers a look into her temperament and reasoning—she resolutely sought happiness after each trial life handed her.

Lady Jane Grey’s marriage and reign were short-lived, as she was forced into both by her parents and the Dudleys’ as an attempt to seize the English throne from Henry VIII’s eldest daughter, Mary Tudor. Married in May of 1553 and ascending the throne for 9 days in July of that year, Jane had little say in either event and barely knew the man she must call husband. However, in the end, she signed her name as, “Jane Dudley.” There are no verifiable sources on the happiness of the match, and indeed she spent most of the months residing with her parents, or recovering from an illness apart from Guildford. Inasmuch, it seems this marriage was solely included in this compendium for its manipulative origins rather than doomed unhappiness.

More than a decade older than her bridegroom, Mary I made the mistake of falling in love with Philip II of Spain. Other than the age gap, there was also the problem of his religion for those of the reformed faith, not to mention the fact that he would undoubtedly bring foreigners into the country, along with unwelcome changes. The people were not happy with this match, though it is understandable why Mary felt it was best. Alas, after two phantom pregnancies, he left her to convalesce and ultimately die alone and broken-hearted. Meanwhile, he lived through two more marriages and continued to be a thorn in the side of England.

Mary Tudor tends to get a short shrift in historical fiction, probably because of the focus on her religious fanaticism, though if you’re looking for a good fictional character study, I would suggest Jean Plaidy’s, In the Shadow of the Crown.

** To be continued in Part II