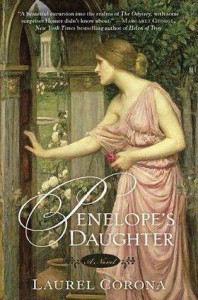 In this novel The Odyssey is retold through the eyes of a character Homer never imagined–the daughter Odysseus didn’t know he had. If you know the original story, which, sadly I’ve never read the epic poem in its entirety (we skimmed it in English class), you’ll notice Penelope has no daughter. Of course, this is a creation by the author, although if you read the Afterword you will learn that of the different known narratives of the story, there is a mention of a child born unknowingly to Odysseus–so not so far-fetched after all.

Xanthe grows up without an abundance of love and support; her mother trapped on a drab island and seemingly desolate for the husband who never came home from the Trojan War, and a father she never knew, and, of whom she was aware, did not know of her existence. Add in a brother who, while not abusive toward her, is indifferent and not very valorous–which, as the heir presumptive, he should have been.

When it becomes apparent that Odysseus probably isn’t coming home, Penelope is bombarded with suitors hoping to win the kingship of Ithaca, for the land is dowered to her and her son an easily disposable weakling. As the years pass, Xanthe too becomes a target of the suitors. And so, Xanthe is sent to live with Penelope’s famed cousin, Helen of Troy, who now resides congenially with the husband she abandoned (and thus started the Trojan War, which caused Xanthe to be fatherless).

The character of Helen is my favorite of the story, and has made me interested in reading more about her (novels by Margaret George and Amanda Elyot come to mind). She’s so complex and, in so many ways, wise–not at all what I had expected of this infamous lady.

This is a very interesting read! I’m no lover of mythology, nor do I read very much historical fiction set before the Middle Ages. This is one for which I have happily strayed from my comfort zone and I recommend to anyone looking for a pleasant, coming-of-age story set in an interesting time period (which may or may not have existed in truth). I loved the descriptions of the festivals, goddesses and the making of the cloth–the opening chapters are especially metaphorical, as Xanthe describes her weaving as pieces of her life.

A helpful hint for those ‘pronunciation challenged’ like myself: Use the extremely helpful Glossary and Pronunciation Guide in the back of the book, else you’ll be butchering the characters names in your head.