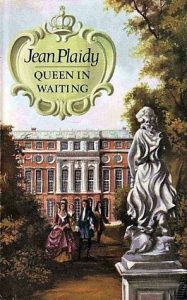 Queen in Waiting opens with Caroline of Ansbach at only 8 years of age leading a difficult life as an outcast in her own home due to her father’s death and step-brother’s disdain. Luckily for her, however, she is accepted into the household of the Electress of Brandenburg where she receives an excellent education and is considered quite a catch among Protestant bachelors. A series of events brings her to the notice of George Augustus, son of the future King George I of England.

It looks like I have finally finished the 11-book Georgia Saga by Jean Plaidy after about as many years! And, what’s more is that I managed to write a review of each of them (as linked below).

QUEEN IN WAITING is the second in the series, and I’m not sure how I managed to read these books so out of order, but looking back on my review of Caroline, the Queen I can see it was a mistake in that instance. I found the latter book difficult to get into, but ultimately satisfying. If I had read Queen in Waiting first, I believe I would have had a better understanding of the main characters.

The Princess of Celle
Queen in Waiting
Caroline, the Queen
The Prince and the Quakeress
The Third George
Perdita’s Prince
Sweet Lass of Richmond Hill
Indiscretions of the Queen
The Regent’s Daughter
Goddess of the Green Room
Victoria in the Wings

“When Caroline of Ansbach arrives in England, King George is old and sour, his mistress ugly and his wife imprisoned at his own hand for over twenty years. She has grown up watching her mother Eleanor’s loveless and dangerous marriage, and is determined to avoid a similar situation. So she marries the Prince of Wales, George Augustus, and they are popular among the people, leading the King to resent them.

In what will become typical Hanoverian style, father and son loathe each other and exist in a state of constant competition for power. She quickly realizes that her husband is unintelligent and sees that she will be able to control him to some extent. Despite plenty of obstacles, including her father-in-law’s control of her children, she refuses to lose sight of her aims.”