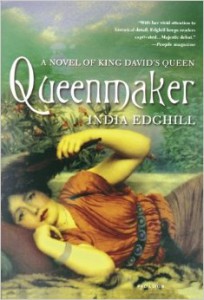 What happened after David defeated Goliath? Through the eyes of King David’s first wife, Queen Michal, we see his rise to power and the political and religious trouble of his reign.

Michal is the daughter of Saul, who became King of Israel when the prophet Samuel decreed that it was the will of Yahweh. David, the youngest son of a shepherd, became the King’s favorite harper and companion. When his influence and power became too great and King Saul began to turn from him, David collected his own followers, including Samuel, who proclaimed him King along side King Saul, who was showing signs of madness. Two kings, of course, was not conducive to a peaceful nation, and Michal was stuck between loyalty to her father and brothers, and to her husband.

Michal’s story is lengthy and filled with sadness, but also endurance and wisdom. We first see her as a young girl in love with the spellbinding song-writer, David. When David is forced to flee the city, Michal is at the mercy of her father, who marries her to another man. Years later she is ripped from her home once again and forced to live in a palace like a bird in a gilded cage. David the King is not David the Harper she fell in love with, though everyone around her feels he is perfection itself. Michal must take what is offered and try to find a way to carve out happiness within the confines of her cloistered new life.

I enjoyed this read from start to end–it has everything I appreciate in a novel: the protagonist growing up within the pages, balanced personalities and motives, and a storyline that keeps the reader’s attention.