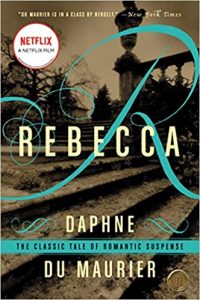 Rebecca has been on the to-read list for ages, and thanks to Book Club, it has been marked off (and was much enjoyed)! First, a short and spoiler-free synopsis:

Late 1930’s. An unnamed protagonist narrates this story–a young woman training to become a lady’s companion. She meets a mysterious widower in Monte Carlo and before she knows it, she’s a newlywed looking forward to starting her life as mistress of Manderley, a great ancestral home in Cornwall, England. Her lack of qualifications haunts her, as the staff–especially the head housekeeper, Mrs. Danvers–continually deride her for her shortfalls. Soon enough she finds that her predecessor, the impossibly sophisticated Rebecca, was everything she could never be. Her husband, somewhat distant, doesn’t seem to understand his new wife’s feelings of inadequacy or the evil that seems to be lurking at Manderley. What really happened to Rebecca, and was her spirit haunting the new mistress’s every step?

My favorite aspect of this novel is its narration style of “stream of consciousness” writing. The reader is privy to the protagonists minute thought process as she’s living it. One example is while she was in the hotel in Monte Carlo, she imagines what will happen if she does a certain thing and her imagination truly runs on and on. It’s so very human, though, and I believe that’s what makes it engaging.

When at first I tried the opening chapter via paperback I wasn’t entirely enamored, but it does serve to set the “dark” tone of the story. I chose instead to read the audio version of this book, and I recommend it. I couldn’t wait to watch the most recent movie version of Rebecca and it did not disappoint. However, at Book Club, we found that the 1940’s version, the 2020 version, and the book all have different endings! You’ll have to read/watch to find out for yourself!