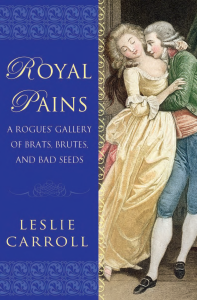 Spanning from the 12th century to the 20th century, a dozen royals–bad in their own special way–are chronicled in this collection of misdeeds, brutality, and (more often than not) insanity. A run-down of the contenders includes such personages as (the given) England’s King John, (the infamous) Vladimir the Impaler and (the lesser known) Prince Albert Victor, Duke of Clarence and Avondale, who was accused postmortem of having been Jack the Ripper.

If you are one of those that sees past times with rose colored glasses, this book will snap you right out of it! I, for one, didn’t realize that even as Western Europe was basking in the new learning of the Renaissance, places such as Romania in Eastern Europe were still using medieval torture methods to keep their subjects in line–and sometimes only for the ruler’s sick kicks.

As usual with Leslie Carroll’s books, I was most intrigued by the chapters on characters I knew the least about–Archduke Rudolf, Crown Prince of Austria, Hungary and Bohemia and Princess Margaret, Countess of Snowdon (the present Queen of England’s younger sister). Rudolf was a man ahead of his time, but with no authority to put his ideas into practice. I can understand how his life ended the way it did. I had to look Margaret up after reading her chapter because, though not by many years, she was before my time and I had heard little about her.

The royals that were just a refresher for me: King John of England, King Richard III of England (and his brother the Duke of Clarence), Lettice Knollys and Pauline Bonaparte. All of the facts presented are accurate with many anecdotes new to me.

Erzsebet (Elizabeth) Bathory, The Bloody Countess is perhaps the most repugnant persona depicted–so shocking and heinous that you almost wish you were reading fiction. Russia’s Ivan the Terrible and Transylvania’s Vlad the Impaler were equally as bloody (more so really) but not with the same aim. While the men were mainly keeping their political positions with their brutality, the countess enjoyed torturing people and used the product of the carnage as a beauty regime.

If perhaps not as enjoyable as reading about royal marriages and affairs, this installment in Leslie Carroll’s ‘Royal’ series is as thought provoking as the first two.