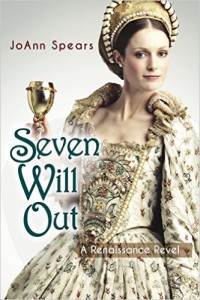 Seven Will Out: A Renaissance Revel
by JoAnn Spears

In Spears’ previous novel, Six of One: A Tudor Riff, modern day historian Catherine “Dolly” Rolly traveled to an astral plane where she met the wives of Henry VIII and learned their stories from the source. This time Dolly returns and is met by the later generation Tudors, including Elizabeth I, Mary Queen of Scots, Bess of Hardwick, and more. During her night of wine and conversation she learns quite a bit, as well as relaying some present day tidbits to the 16th century ladies. Focused on the authorship of Shakespeare’s works, this is an entertaining “what-if” for conspiracy theorists regarding the Bard’s plays, and contains subplots involving Arabella Stuart and, separately, the women involved with Robert Dudley. Dolly’s mission is to learn the truth of a few matters and use her position as a respected Tudorphile to enlighten posterity.

Readers with a fair knowledge of Shakespeare’s works will more likely enjoy this as it contains a good amount of quotes and references, although the verbal tête-à-tête between characters usually includes enough of an explanation to read between the lines. I felt a bit at a disadvantage at first, for not having read the first book. There are many of Dolly’s family, friends, and co-workers introduced in the opening chapters that may have been featured in Six of One, but were information overload for readers just jumping in with Seven Will Out. A few short chapters in, however, and any Tudor fan feels right at home.

With its supernatural element and brow-raising, albeit fictional revelations, this will not appeal to all Shakespeare and Tudor enthusiasts (i.e. the purists). It is, however, a clever series of facts that fit together surprisingly neatly, and the laugh-out-loud quips and antics of the characters keep the reader otherwise entertained throughout the story. I highly recommend this book to light-hearted Tudor fans looking to step away from the plethora of traditional reads of the genre.