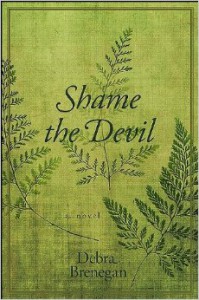 Fanny Fern, 19th Century American literary wit and prolific author, spoke out against inequality through her novels, weekly columns and collections. Though not quite a household name, she was one of the first women to demand a pre-nuptial agreement, started the idea that lead to copyright, and sarcastically coined the phrase, “The way to a man’s heart is through his stomach.”

Born Sarah Willis, Fanny was a spirited child and grew into a sparkling and sassy young woman. Her strict father despaired of her throughout her young life until he handed her off to her first husband, Charles Eldredge. For Fanny, it was a love match, and she spent a few blissful years basking in her freedom as Charly’s wife. Unlike many husbands, Charly allowed Fanny to be herself, even if others thought her unfeminine and unfit.

After Charles Eldredge’s early death from typhoid fever, Fanny was pressured into a second marriage with a man who turned out to be an abusive alcoholic bent on taming Fanny and molding her into his view of a dutiful wife. Rather than live a miserable existence with a man she neither loved nor admired, Fanny chose to divorce him and work to raise her children. Society, however, deemed her a fallen woman, cruelly soiling her reputation and cutting her off from family and friends.

The treatment she endured and her subsequent poverty affected her profoundly and further fed her unconventional thinking that women are equal to men and deserve to be treated as such. Her columns were met with acclaim for the most part, by men and women alike, for her sarcastic witticisms and brow-raising observations.

Once her fame spread, and money—or lack of–was no longer her master, she still had to contend with the divorce and move forward with her newly found public persona.

The story has many facets, and I don’t think I could touch on them all, and certainly couldn’t do them justice—this is a must read book! The storyline flows perfectly, is never stilted or boring and is true to historical fact. The characters are fleshed out—though I’d like to have seen the reaction of a few once they discovered the identity of the famed Fanny Fern—with quite a few well-known names throughout (Harriet Beecher Stowe, Walt Whitman, Charles Dickens, Nathaniel Hawthorne, etc.)

I’m astonished that I was not familiar with Fanny Fern upon receiving this book, although my American history knowledge is (ironically) somewhat lacking for a history enthusiast. Even so, it just seems that her name should be set alongside other American greats, as she was a forward thinking, clever and utterly courageous woman who was undeniably one of the stepping stones to encouraging women’s rights. On searching for quotes and websites on Fanny Fern, I found very little in depth written about her—she produced three novels (Ruth Hall being the most popular), three children’s books and six collections, as well as weekly articles for almost 20 years. Much of her writing seems to be repeated but not credited to her.

This is hands down one of my favorite books—I enjoyed it from start to finish, and though it is a sizable hardcover with a textbook feel, it reads with the ease of a genre paperback. Book clubs should add this to their line-up and historical fiction lovers (even those not well versed in American history) will devour this book!

“There are no little things. Little things are the hinges of the universe.”
“I am convinced that there are times in everybody’s experience when there is so much to be done, that the only way to do it is to sit down and do nothing.”
“Love is a farce; matrimony is a humbug; husbands are domestic Napoleons, Neroes, Alexanders,–sighing for other hearts to conquer, after they are sure of yours.”
“She said it was beautiful to be loved, and that it made everything on earth look brighter.”
“Marriage is the hardest way to get a living.”