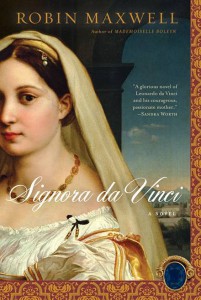 First of all, I have to say it – this is my favorite Robin Maxwell novel! Yes, even more than O, Juliet I’m afraid! I’m so glad to have saved this one for last, and though I was on a tight schedule to get it read, I savored it for 2 more days than I had to. I planned to get it read by December 31st, so that it would be on my 2009 list, but I couldn’t rush it. I read it slowly and deliberately and finished it up on January 2nd.

Back in 2002, when I worked for Borders, the company was preparing a huge campaign to promote The Da Vinci Code by Dan Brown and asked employees to read the book for this purpose. And so I was one of the few people who read it before it became immensely popular; and I genuinely loved the book. I am always intrigued by religious conspiracies, especially those involving Catholics and Protestants before, during and after the Reformation. I knew much about Leonardo da Vinci because after reading The Da Vinci Code I poured over art books and biographies, trying to learn as much as I could about this fascinating Renaissance man.

Now, back to the book at hand: Signora da Vinci…

Caterina is an alchemist’s daughter. Though her father is respected in their small town of Vinci as an apothecary, he is secretly teaching his motherless child to read ancient texts and the art of alchemy, which are viewed as heretical by the Church of Rome. Once Leonardo comes along, his affluent father deems it necessary that he be raised as the bastard son of an important gentleman, which does give him the connections he needs to enter the world of artists in Florence.

Lost and hopelessly depressed without her brilliant son in her life, Caterina adopts a new identity in order to be near him as he grows into a man. I don’t want to give more details away, as I really enjoyed all of the little surprises in this novel. Lorenzo de Medici is a prominent figure, as his grandfather is in O, Juliet and it was nice to have that little connection between the two novels. If you haven’t read Mademoiselle Boleyn, you will also be pleasantly surprised to find Leonardo da Vinci featured as a sort of father figure to her in the French court, where he spent his last years (carrying around a certain portrait, the Mona Lisa).

The characters in this book are very likable, with the exception of the antagonists, who are not so evil as to be unbelievable. I’ve always found Robin Maxwell’s writing to be balanced in this respect and she gives a panoramic view of the setting and political and religious agendas. In other words, her stories do not revolve solely around the main character, but offer a look at life in general. I can’t give her too much praise, as her books are some of the best historical fiction available today!