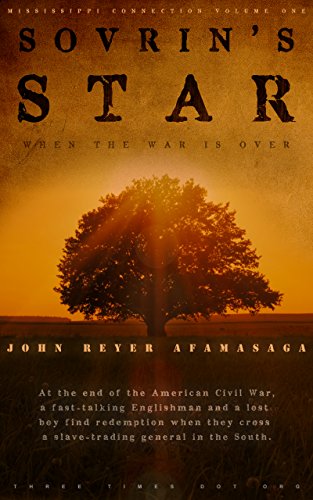 This historical novella follows two unique characters through the post-Civil War South–a crippled orphan boy of 10, and his new friend, Tiker, a man of many trades, who was himself an orphan in England. Having grown up in the streets, he became a prizefighter, a negotiator, and a spy. After emigrating to America, he ingratiated himself with swindlers, taking pleasure in ripping off the scoundrels. With Sovrin in tow, Tiker comes across the opportunity to liberate a group of former slaves who were still in captivity, and at the same time starting an enterprise he had engaged in while in England–prizefighting. Unfortunately, swindling swindlers seems to be catching up with the philosophical wanderer. There still seems to be much story yet to tell, and will likely be covered in the follow up stories, York’s Story and Queenie, the Queen of England.

This is an interesting subject, but one that’s out of my comfort zone to critique. It’s a quick read and holds interest, although could use more details. The author’s website contains some interesting documentaries and a bio that gives a broader perspective of his aim. In his own words: “I’m an auditory learner so listening and telling stories is the most natural and enjoyable thing to me.”

At the end of the American Civil War, ten-year-old Sovrin is alone and lost in the South. At times, he thinks he would’ve been better off if he’d died along with his parents in the war. After all, who wants a kid with a disability?

Tiker is a cockney-accented, former bare-knuckle prizefighter from England. An agent provocateur for the Confederacy under the guise of a confidence man, he is sent to spy on a Union Army Colonel.

When Tiker and Sovrin meet while trying to cross the Tennessee state line, Tiker is struck by the boy’s confidence and gumption. As a way out of being a spy, but also out of guilt, he takes Sovrin in.

Their journey becomes one of redemption when Tiker seizes an opportunity involving a slave-trading general of the Confederate Army.