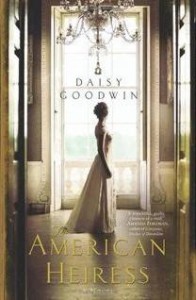 During the Gilded Age, an American heiress named Cora Cash leaves Newport behind and travels to England with her title-hunting mother. A chance encounter with a Duke leads to a proposal that by all appearances seems to be a love match. Trouble begins even before the ceremony, but the couple moves forward with their plans, vacationing in Italy before moving to the Duke’s centuries-old mansion in England, which is in dire need of modernizing and repair.

Cora, a little spoiled and naive, has problems adjusting to her new life and role as Duchess. Her formidable mother-in-law, a duchess twice over, is controlling and condescending and most of the society people and household servants snicker at her foreign ways. The only consolation she finds is in her husband, who suddenly becomes withdrawn, sullen at times and very secretive. Cora feels very much an outsider as she tries to hold her head up publicly, while sorting out her dilemma alone in the gilded cage that her money had bought.

‘Money can’t buy happiness’ is certainly the theme of this novel, but there is more to the story than a girl finding her true worth. Though Cora can be exasperating at times, she is at heart a good person and wishes above all else to be an exceptional wife. The Duke is a man who is difficult to read and throughout the story has the reader guessing whether his intentions are good or bad.

I listened to this book on audio and it has been one of my favorites. The narrator is pitch perfect for the characters she brings to life–from the servants to the American and the British aristocrats. One surprising fact I found is that this is the author’s first novel (though not her first book). The descriptions and dialog are flawless and natural, as are the characters’ motives and reactions. I was well-pleased with the ending as it gave just enough information to satisfy.