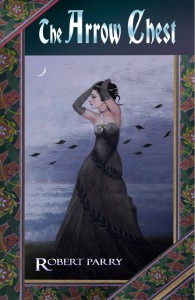 Blending the life of a 19th century Pre-Raphaelite painter with famous Tudor personages, The Arrow Chest is the story of a Victorian couple in an eerily similar situation to the most famous of Henry VIII’s wives, Anne Boleyn. Amos Roselli and his lifelong muse, Daphne, meet again after her marriage to a wealthy industrialist. Upon her parents urging, and her own desire to live comfortably, she chose Oliver Ramsey, not for love but lifestyle. He was at first an ardent admirer and happy enough to have her on his arm. But after the initial honeymoon period he began to count the disadvantages she brought–no money or connections, and ultimately no heir. Meanwhile, Daphne too began to see him for the corpulent brute he became (rather quickly) and so life as a poor painter’s wife may well have suited her after all.

Into all this is mixed apparitions, mythology and verse that center around Roselli, his intuitive maid, Beth, and Daphne, while he paints her portrait at her home on the Isle of Wight, where many famous poets and artists resided–including the reclusive Tennyson.
Using the Tudor parallel, I had imagined it would be another predictable spin on the story of Anne Boleyn, but it is done so subtly only the reader versed in Tudor history would recognize the connections. As the events and premonitions are not entirely replicas of Anne Boleyn’s plight–Daphne’s story is intriguing and Roselli’s connection with her astoundingly modest and respectable.

Most interesting to me is the inclusion of the legend of Cupid, coupled with the arrow chest in which the opening chapter relates the finding of Anne Boleyn’s remains. Roselli’s allegorical final painting of Daphne is the underlying theme of the book, and once the story culminates to the understanding of all the hints, it is far too captivating to put down.

With the author’s intelligent writing, charming Victorian prose and vast knowledge of the England of the past (including people, lifestyles, clothing, foliage, landmarks, seasons and even weather patterns) the historical authenticity of this novel is very engaging and, at times, utterly breathtaking.