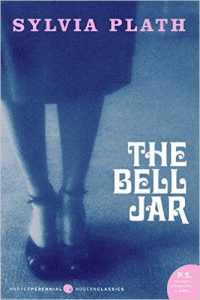 The Bell Jar
by Sylvia Plath

Esther Greenwood is a promising, young college student from Boston who had been given the chance to gain real world experience and connections at a month-long literary program in New York City. Somewhere along the way she began to lose pieces of herself, and once she returned home her reality quickly unraveled. She started looking for ways to commit suicide, and ended up in a series of mental facilities. Her unnerving (though curiously intelligible) thought processes are succinctly described, with memories plucked from here and there and mingled with her ravings.

For me, Esther is not much of a relatable character, or even a likable one, but she serves her purpose in bringing to light the world of mental health in the 1950’s. Labotomies, electroshock treatments, and insulin coma therapy are a few of the procedures mentioned by name or description. It truly opens a fascinating, although heartbreaking, sliver of history that is alluded to in pop culture quite often, but not delved into for serious discussion or introspection. It seems to be one of those subjects that is regulated to a back shelf because of its sinister nature and the only genre willing to give it a voice is horror–usually of the “haunting” variety. I think this book plays an important role in portraying the true history of the unfortunate realities of mid-20th century mental healthcare. Although this does not make for a pretty read, it is enlightening, and demonstrates the talent of the author. Her early passing is truly a loss for the literary world.

This is another classic that I decided to take on, although it does have a historical feel being set in 1953. It was published in 1963 shortly before the author’s tragic death. Since finishing the book (ironically on February 11th–the anniversary of the author’s death), I’ve learned that it is sadly autobiographical in nature. Indeed, much of the plot mirrors Plath’s life and experiences, making this read all the more poignant.

A couple of descriptive quotes:

“On every side of me the red and blue and white skiers tore away down the blinding slope like fugitive bits of an American flag.”

“The great, grey eye of the sky looked back at me, its mist-shrouded sun focusing all the white and silent distances that poured from every point of the compass, hill after pale hill, to stall at my feet.”