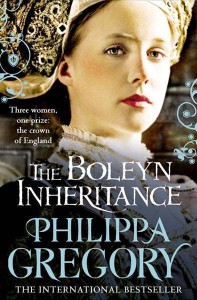 I listened to this on unabridged audio and have decided Philippa Gregory’s books are much better read aloud than read to oneself. This one is even better than some of the others because it has 3 narrators: Jane Boleyn, Katherine Howard and Anne of Cleves, each doing a perfect job with their role. Jane Boleyn is calculating, haughty and stern, Katherine Howard is silly, breathless and flirty, and Anne of Cleves is sober, resigned and resolute.

Jane Boleyn, Lady Rochford–infamously known for sending her husband to the block by giving evidence against him–was living with begrudging relatives when the Duke of Norfolk recalled her to serve Anne of Cleves. Ceaselessly scheming to further the Howard family’s interests, he placed her in the Queen’s rooms in hopes of finding a way to return to the King’s favor after the downfall of Anne Boleyn. Luckily for the Howard family, Henry was dissatisfied with his fourth wife and quite infatuated with their girl, Katherine Howard.

Anne of Cleves, fourth wife of Henry VIII, came from an unhappy home where her brother emotionally abused her and her mother catered to her son’s whims. Though she was a model royal consort in every way, Henry’s immediate dislike spelled disaster for her position in England. She escaped with her head, but danger still clouded her life while Henry lived.

Katherine Howard, an insignificant and ignorant niece to the Duke of Norfolk, first came to court (and the notice of Henry) to serve Anne of Cleves. She was completely unprepared for the role of Queen and blindly trusted the advice of Norfolk and Lady Rochford. She was only sixteen, uneducated and extremely immature–all of which transformed the court into a rowdy maid’s chamber, much like the one at her grandmother’s home in Lambeth, where she grew up. With little discretion Katherine committed utter folly by following her desires and taking a lover.

All three of these women were victims of men. The King, of course, gathered and discarded women at will–even foreign princesses–and forever blamed his conscious, which was (of course) guided by God. The Duke of Norfolk served only The Duke of Norfolk, and so Jane Boleyn found herself used when she was sure he would give her a proper settlement in the end. The lone survivor, Anne of Cleves, cleverly kept her head held high through embarrassment and danger, outliving Henry and all of his wives in a comfortable position far away from her unloving family in Cleves.

When I first read this book years ago it was instantly one of my favorites among the Tudor novels by Philippa Gregory. I enjoy the three perspective viewpoint, and it’s rare to find books on Anne of Cleves. The audio version is my recommendation, above the regular book because I am convinced that she writes how people speak, which sometimes looks silly on the page–the repetitious words and trains of thought–but sounds perfect as performed by the talented narrators in this audiobook.