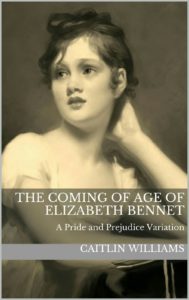 The Coming of Age of Elizabeth Bennet
by Caitlin Williams

In the genre of Jane Austen variations, this is a particularly long tale, spanning the course of five years. It also stands out among its contemporaries because it’s a prequel of sorts. The author imagines Elizabeth Bennet at the age of 15 with a personality reminiscent of the character of Lydia, sans the officer obsession. Sent to live at Pemberley after her father’s death, Darcy tries (and fails) to make a ‘proper’ lady of Elizabeth, and much frustration, misunderstandings, humor and eventual admiration ensue.

What seems a far-fetched and brow-raising plot actually turns into an intricate and plausible story, keeping the reader enthralled as many themes from the original are brought to light in an entirely different manner. Wickham still tries to scheme, Miss Bingley is thoroughly disdainful, and Elizabeth is shunned by many of Darcy’s peers.

Elizabeth, at first, is exasperating, but it has to be remembered that she’s an emotional 15-year-old girl who has just lost her beloved father. She is angry with him for arranging her future away from her home and family, and tends to act without thinking of the repercussions. Thus her “coming of age” is played out over several years in which she grows into her role.

Some Austen fans will not like the beginning, but it is well worth persevering for the latter part of the story. I chose this book because I found much praise on social media, and I can’t turn down a good Austen variation. It is a well written, compulsive read, having kept me up late several nights. Recommended for readers of Austen fan fiction!