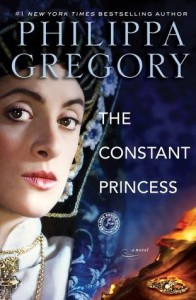 I first read this book years ago when it was newly published and remember it as one of my favorite Philippa Gregory novels. I liked the character of Arthur and Catalina’s descriptions of her life in the palaces of Spain. I do remember thinking the depiction of Henry VII was… different. And I enjoy an unconventional telling, which Gregory always provides.

Listening to the book being read aloud makes the repetitious prose less annoying. It actually sounds the way a person thinks–which is probably what the author intends–but reading it on paper it doesn’t have the same effect. The narrator has a pleasant and appropriate voice for historical fiction, with perfect pronunciation of foreign names and words.
The story begins with Catalina (Katherine of Aragon) as a child on campaign with her parents. The camp catches fire and she witnesses her indefatigable mother take charge of the situation with more bravery than any man. She begins to model herself after the great Isabella of Spain, setting impossible standards for her conduct and demeanor.

One of my favorite parts of this book is Catalina’s meeting with the moorish doctor, whom she summons when she losses her first child. I like that the other side of the religious debate is given a redeeming chance, and that Catalina grudgingly accepts he is not ‘of the devil’ as she had been told.

“Knowing that you do not know is to ask humbly, instead of tell arrogantly. That is the beginning of wisdom.”

While I don’t think for a moment that Catherine and Arthur truly consummated their marriage, Philippa Gregory makes her theory believable with facts strewn in that seem to fit perfectly with the fiction. Henry VII’s losing bid for Catalina as wife is excellent reasoning for his contemptuousness in allowing her to live in poverty, betrothed to Henry, but not a legally binding arrangement. I also enjoyed the way her death-bed promise to Arthur was played out, and how it affected her relationship with Henry.

Henry VIII is depicted in much the same way as Jean Plaidy’s characterization. I’ve not found very many sympathetic versions of him–perhaps The Autobiography of Henry VIII by Margaret George is the only one. Because of it, I like him a little… just a little.

If you’re a Philippa Gregory fan I do recommend the audiobooks, even if you’ve read them before. They really do sound better than they read.