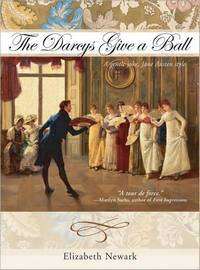 The Darcys Give a Ball: A Gentle Joke, Jane Austen Style

This Pride & Prejudice continuation opens with a fascinating view of the Collins’ married life, a run-down of their children’s personalities and a look back at both Mr. Collins and Charlotte Lucas Collins during their youth. Mr. Collins may be one of the unsavory characters from the original, and is still with this depiction, but his childhood held many clues as to why he was so supercilious and staid. Their eventual move into Longbourn is not quite so upsetting to the Bennett women, as they were mostly settled by this time. With Lady Catherine de Bourgh having passed away a few years prior, there are no more connections between the Collins’ and the Darcys’–until a Darcy son happens upon a Collins daughter.

Meanwhile, with a certain gentleman in mind, the Darcy’s spoiled daughter suggests a ball to celebrate her 19th birthday. The author has borrowed characters from all of Jane Austen’s novels and given their fictional children personalities that match their parents. For a book of this size (156 pages) this is the only way to have a huge cast of characters that do not need a proper introduction, but at the same time, it is better appreciated by those who are familiar with all of Austen’s characters beforehand.

Another plus to this continuation is that it’s not riddled with insinuations and quotes from the original, with only one occurrence of, “It is a truth universally acknowledged…” Elizabeth and Darcy did not relive their courtship like you see in many sequels–the focus is on the younger generation and I found the two main Collins siblings to be excellent protagonists. Though a short and quick read, I recommend this as one of my favorite Pride & Prejudice continuations! This book was originally published in 1997 as Consequence, before the Austen Sequel genre became immensely popular.