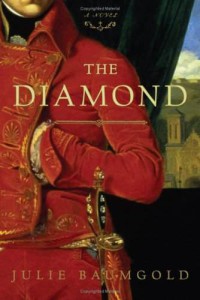 From British occupied India to the Kings of France, the Pitt Diamond – later named the Regent – saw many royal personages throughout its history. It was first discovered by a slave toiling the mines and slipped through several hands of thieves and vagabonds before finding its way to Thomas Pitt, Governor of Fort St. George, who saw the diamond as a means to improve his family’s fortune and status. By this time the diamond was rumored to be bad luck to any who possessed it, which is the premise for this intriguing story.

Most of the story is told as a history being written by Count Las Cases, an exile on the island of St. Helena and companion to Napoleon. His main duty is to help the emperor write his memoirs, but as a further diversion from the unfriendly British guards and the jealous servants, Las Cases begins research on a subject that intrigues both himself and the emperor.

As Las Cases tells the history of the diamond, the emperor reads over his work and inserts his own facts and opinions, though Las Cases writes much in code – most frequently when he comes to the point in the history where Napoleon possessed the stone. There is a chapter near the end called The Emperor Breaks My Code which is among the more humorous parts of the book.

Thomas Pitt, grandfather of William Pitt the Elder and great-grandfather of William Pitt the Younger (Napoleon’s ultimate rival), the first owner of repute, tries to sell the diamond to many royals before it is finally purchased by the Duc d’Orleans, who is acting as regent for the boy king, Louis XV. The diamond remains the property of France’s crown jewels through Louis XVI and Marie Antoinette, but is stolen during the French Revolution. Rediscovered, it is locked away by the new government and then comes into the hands of Napoleon, who refuses to give this one diamond to his jewel-obsessed wife, Josephine. Into the hilts of several swords it went, until his final exile to St. Helena. After Napoleon, as the government swayed from kingdom to empire under the remaining Bourbons and Bonapartes, the Regent diamond adorned the ruling power and was finally interred at the Louvre museum.

This book, though only 304 pages, is a hefty read and not for those who enjoy light, easy novels. In fact, it seems more like a non-fiction biography most of the time. I have researched some of the events mentioned and for the most part it is accurate, though the author has a note at the beginning that states there is fiction intermingled.

I enjoyed this book immensely and recommend it to those interested in the history of France. There are many details from the courts of Louis XIV, Louis XV, Louis XVI and Marie Antoinette as well as the courts of surrounding countries. The French Revolution is seen through the eyes of an émigré and, of course, directly after is the time of Napoleon. Most interesting to me is the history after Napoleon, as I was not familiar at all with this area of history and I learned much about the times. From fashion to court etiquette, through desperation and debauchery, this is truly an amazing story – not just about a diamond, but about the people whose lives were affected by it.