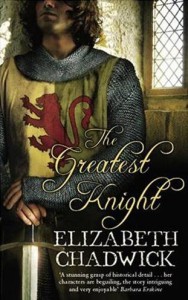 The Greatest Knight, set during a time when tournaments were the rage and war an unfortunate reality, spans the life and times of a humble knight who truly lived by the knight’s code of chivalry. A favorite in the tourney, he quickly made a name for himself and came to the notice of Eleanor of Aquitaine, the Queen of England. William was made tutor of the Young King, Henry, who had (perhaps foolishly) been crowned during his father’s lifetime.

Through the many skirmishes between Henry II and his four sons, William stayed loyal to the lord he vowed to serve, though it did not always promote his own best interests. There were many envious of him and his position as royal favorite, though it was an honor well earned through loyalty and faithfulness.

Having read The Courts of Love, Jean Plaidy’s autobiographical novel on Eleanor of Aquitaine, I knew something of the story line, however, Chadwick expands upon the world of the medieval tournament and all the intricacies of the sport. There is much humor and it keeps the story moving right along.

William Marshall, both his fictional portrayal in this novel and what is known of his character historically, was the epitome of knighthood. With this extremely attractive protagonist and plenty of political intrigue, this book makes an excellent read for any lover of medieval fiction!