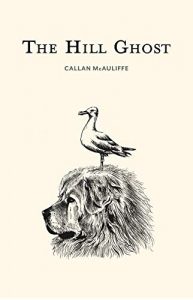 The Hill Ghost
by Callan McAuliffe

In 19th century Scotland, a Tibetan mastiff sheep-dog and his eccentric seagull friend, Blue, team up to thwart a returning pack of wolves bent on savagery and revenge. Blue, an ex-seafaring bird, brings a nautical flamboyancy to the story, which culminates in a parallel tale in the Epilogue, leaving the reader to wonder if one or the other is metaphorical. Yet, the ending is tidy, if wrong (cats are better).

The beginning of this story strongly reminded me of Samuel Beckett’s absurdist play, Waiting for Godot, which I read a couple of years ago after reviewing Jo Baker’s A Country Road, A Tree. Both have primarily two characters in a single setting in the wintertime near a tree. These characters are waiting on someone who may or may not come. There is also sharp-tongued dialog, volatile exclamations, and an existential crisis (or two or three). However, several chapters in, The Hill Ghost, gravitates in an unexpected direction, forcing the canine protagonist to question his assumed code of conduct. There is an overabundance of philosophical pondering, much action, and a light bit of romance—something for everyone.

This is a witty and at times a laugh-out-loud foray into a noble beast’s world, where lesser animals judiciously content themselves on the lower rungs of the food chain, and sometimes the laws of nature are abandoned in favor of the humanistic traits of loathing and vengeance. It goes well with Of Monsters and Men’s album Beneath the Skin if you enjoy putting a soundtrack to your reading.

Favorite quote:
‘Nevermind that. I meant that maybe Bruuma – so ostracized – might be a less tainted voice of reason, seeing the details sans red spectacles.’
‘Spectacles?’ asked the Mastiff.
‘Sans… blinding vengeance.’
‘Sans?’ asked Bruuma.
‘Christ alive – it means “without”.’