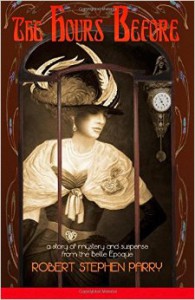 Set during the Belle Époque era, The Hours Before is the story of Deborah Peters, a once-celebrated clairvoyant turned dejected society matron, who is bent on revenge and readying herself for a final assignation with her adversary. Readers take a backward look at the events leading up to the protagonist’s current wretched state, and uncover the step-by-step truth of her daughter’s mysterious disappearance and possible demise.

Penelope Peters, an English twenty-something student studying in Europe, is caught up in an occultist group focused on turn-of-the-century doomsday. Her father, Hugh Peters, is the head of a popular gossip newspaper which has of late determined to smear his ex-wife’s name and ruin her while covering up his daughter’s scandalous affiliations. Deborah, increasingly desperate financially and mentally, treks across the continent in search of clues. Meanwhile, in steps Herman “Manny” Grace, a gentleman magician, who takes a special interest in Deborah’s plight. Together they discover a most unusual occult society with disturbing connections to Europe’s rich and powerful.

This novel offers an interesting look at apocalyptic lore, as well as the inner workings of the media’s damage control during the time period. While Deborah is an eccentric, but admirable character, Manny overtakes the story with his eloquence, intelligence and heroism. Parry, as usual, has a proficient grasp on the era, introducing readers to the customs and society of the budding twentieth century. The Hours Before will delight those who enjoy mannered characters, uncommon plots and a slight bit of mystery, though, at 400+ pages, is not a quick read.