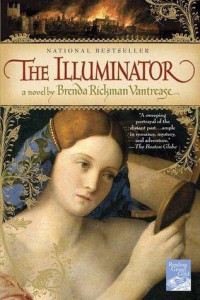 Anyone interested in the religious strife of 14th century England will devour this book! Wycliffe, John Ball, Chaucer and many other famous names of the era are depicted as background characters. The main story focuses on the widow of a knight, Kathryn, her two sons and a book illustrator who comes to live with them at Blackingham Manor while he works on a manuscript for the local abbey. But church mandated texts are not the only projects on his mind — he is also secretly illuminating the pages of the first bible in English for Wycliffe. With the local sheriff trying to woo Kathryn for her lands, a murdered extortionist priest and the peasant rebellion on the rise, events move quickly and seem to be centered on the illuminator and Blackingham Manor.

I’ve always been interested in the origins of the English language and this book explains the three major languages of the time that are meshed together and finally accepted as English, the national language of England: the churchman’s Latin, the nobleman’s French and the commoner’s mixture of Saxon-Welsh-Dane tongues.

Social class, most notably the grudges of the poor commoners, is expanded upon. John Ball preached, “When Adam delved and Eve span, who then was the gentleman?” Lollards, the early religious reformers, were settling the foundation for the changes in the Roman Catholic Church in England, later known as the Protestant Reformation.

Religion and politics aside, this is also a story of love, sacrifice and heartbreaking loss. With excellent characters and an amazing, twisting plot I never once guessed what was coming. The end is quite shocking. I really enjoyed this book!

Additional comments for the audio version: Masterfully narrated by Simon Jones, I found it very enjoyable. His slight British accent fit well with the story and was not distracting at all (as some accents can be). The only complaint I have is that it was an abridged version that cut out a lot of the story line that made me initially love the book. Focused more on the story of Finn and Kathryn, left out is Colin’s story (which details much of the reasoning behind the Peasants’ Revolt) and Magda’s curious gift. Pleasantly surprising is the author interview on the last disc, where Brenda Rickman Vantrease tells us about her research, writing and interest in this specific era of England’s history and the church at the time. While I don’t feel the audiobook could replace the pleasure I had reading the book in its entirety, it was a nice diversion while driving and has enticed me to put her two newer books higher on my reading list!