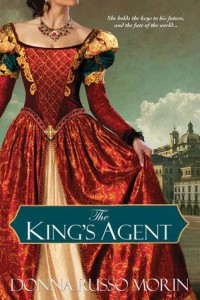 Blending fact and fantasy, this fast-paced novel–which can only be described as an articulate historical adventure–Donna Russo Morin brings to life a real historical figure, Battista della Palla. Serving his beloved Florence’s political interests, Battista works as an art dealer for France’s King Francois I. He readily bargains and bribes to collect sought after pieces, but is not above thievery if necessary. The ultimate task the King sets him to—unearthing a secret and powerful triptych—proves to be his greatest conquest yet, and the most dangerous.

With paintings as clues, and the words of Dante as guide, Battista and his band of loyal men find themselves at a villa where the smart and adventurous Lady Aurelia joins in their hunt, becoming an important part of the group and essential to Battista in finding the ultimate relic.

Though the story is set in Florence, Battista and Aurelia travel to other cities in search of clues, and while in Rome visit Battista’s friend and mentor, Michelangelo di Lodovico Buonarroti. Descriptions of the city, the Sistine Chapel and the Vatican are minutely detailed, including Michelangelo’s own design of the guard’s uniforms.

Though we, the reader, do not know of Lady Aurelia’s true identity until the end of the story, she is nonetheless sympathetically written as a likeable and trustworthy character—but it is a bit maddening to wonder where her true loyalties lie. Battista, on the other hand, is completely fleshed out from the start, and admirable as they come. Along with all of Morin’s other books, this is a fantastically written story with beautiful and eloquent prose—that is was partially inspired by Legends of Zelda is not apparent in the writing to this non-gamer, but others may decipher the links while reading.