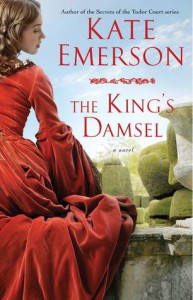 Thomasine Lodge, an heiress of considerable fortune, is sent to wait upon the young Princess Mary by the odious Sir Lionel, who purchased her wardship. Expected to ingratiate herself to gain favors, Thomasine instead forms a close bond with the princess, giving her complete loyalty even though the majority of the court is flocking to the king’s favorite, Anne Boleyn. When Thomasine finds herself shuffled unwillingly from the princess’s household to that of the ‘concubine’, she swears to uphold her oath by spying for Mary and putting her interests before the king. When her last hope means forfeiting her honor and becoming the king’s mistress, Thomasine is torn between personal qualms and loyalty.

As usual with Kate Emerson’s Tudor novels, she takes a little known character from the era and spins a story around her, spicing it with much historical detail. This one in particular didn’t even have a name in the history books–just an allusion to a ‘damsel’ who interested King Henry VIII while his second wife, Queen Anne Boleyn, was pregnant. Only, this isn’t just a fleeting fling for our protagonist–she is engaging in intrigue for the purpose of restoring the princess Mary to her father’s favor.

While fighting for Mary’s rights, Thomasine is also silently at war with her ‘protector’, the man who purchased her wardship. In this she becomes increasingly entangled, finally enlisting the help of fellow waiting ladies and court lawyers. I felt this aspect of the story, as well as her budding romance with a silk merchant, was not very plausible, but added the needed back story and reasoning for her actions in many situations. Had she not had these personal dilemmas, her characterization would have been rather flat. Thus in this case I am a fan of the cookie-cutter heiress theme. Also, while I generally do not enjoy negative Anne Boleyn depictions, it did work well for this novel. The historical accuracy and details are superb, and the prose is pitch-perfect.