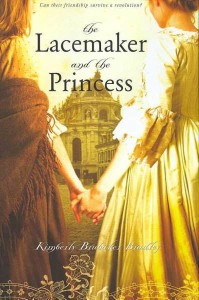 The Lacemaker and the Princess

Isabelle, a lacemaker’s daughter, lives a poor and somewhat miserable life until, delivering lace to a noble at the palace, she is noticed by the queen, Marie Antoinette. It just so happened that Madame Royale, Therese, was in need of a playmate that day — and this Isabelle became, permanently.

Isabelle’s brother, George, is a groom in the stable of the Marquis de Lafayette, who was noted for his devotion to the cause of liberty, having fought in the American Revolution. Though Lafayette wishes to protect the king from harm, he is also the head of the newly formed National Assembly, which is giving voice to the common people. George is soon leaning toward the new government and joins the National Guard, but not before warning his sister of the dangers of befriending the royal family.

Throughout this story, the author cleverly brings into play a view of both sides of the revolution. Isabelle is torn between her family and the princess, and it takes much for her to see the situation on both sides. For example, another of Therese’s companions has a sickly mother, who is very poor and dies in a cold, dirty shack. Isabelle is aghast that the queen did nothing to help the family and blames the poor living conditions for the illness. In response, Therese takes Isabelle to visit her brother, the Dauphin, who himself is dying of the same disease. As he is surrounded in splendor, Therese points out that it is not the queen’s fault the peasant woman had died. In turn, Isabelle opens Therese’s eyes to some of the atrocities happening in France.

This is an excellent read for young adults on the French Revolution. While you may think it is unlikely that a lacemaker’s daughter could become a companion to the King of France’s daughter, such a thing did actually happen. The character Ernestine, daughter of a bailiff and companion to Therese, was based on a real person. All of the characters in this novel have constant, genuine personalities and the facts and timeline are accurate.