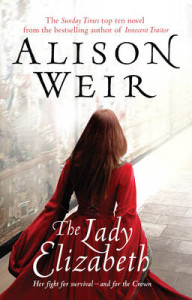 A very comprehensive novel on the Virgin Queen’s early life, The Lady Elizabeth begins when the precocious child is not yet three. During her years as the king’s bastard daughter she witnesses her father marry four times, welcoming a new “step-mother” each time—fully aware that Catherine Howard’s fate was the same as her own mother’s. This shapes her view of the marital state, as does the pieces of her mother’s life and death that she is able to glean from servants’ gossip and royal outbursts.

The next stage finds her in favor as the king’s “good” sister. As she is of Edward’s faith, she enjoys much learning and freedom during this period, though it ends with her disgrace as a result of the Thomas Seymour affair. Very detailed and with excellent characterization, this mysterious period in Elizabeth’s youth is re-imagined in such a way that the author felt the need to clarify her thoughts on the matter in the Author’s Note.

With another lesson learned, Elizabeth soldiers on through her sister’s reign, Bloody Mary. As the queen’s sister and heir her position should have been secure, except that she was the Protestant hope and a threat to the newly reestablished Catholic religion. With factions rising in her name, she must keep her wits about her to prove her innocence. Her very survival during this time is a testament to her intellect and cunning.

The motives the author chose for the well known events of this much-written era are absolutely believable. This read, for me, has been one of the most detailed and balanced on the young Elizabeth. I listened to the 16 disc audio, and enjoyed the narration immensely.