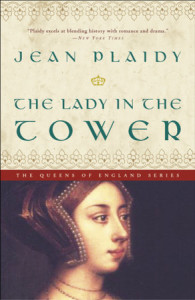 The Lady in the Tower
by Jean Plaidy

This is the book that started my obsession with Jean Plaidy–the first of her novels I read and my absolute favorite characterization of Anne Boleyn. Eight years have passed, and reading it again I stand by my initial delight in finding an admirable protagonist in Anne–after having been introduced to her by Philippa Gregory, with her not-so-flattering portrayal of Anne as a great intriguer with temperamental dominance.

In The Lady in the Tower, Anne is imprisoned in the Tower of London, recounting her life in its entirety in an effort to distract herself from her present state. She details her early life at Hever, the years spent in the court of France, and her relations with James Butler, Henry Percy and Thomas Wyatt. All of this makes up the first half of the story and leads up to the Henry VIII’s entrance into Anne’s life.

Losing her mother at a young age, Anne was precocious and wise beyond her years–well-prepared to join the King’s sister, who had become the Queen of France. Born into an ambitious family, court life suited her–though she loathed the position her sister had taken as François’ mistress (and later Henry VIII’s). She was aware of the gossip and ribaldry focused on Mary’s promiscuity and she was shamed and horrified at the indignity of it, and very determined not to follow in her footsteps. This, and a natural inclination to chastity, set her resolve that would one day hold off the King of England for seven years before their marriage.

She gained a love of learning and was greatly influenced by the French King’s sister, Marguerite d’Angoulême. During Anne’s stay in the France, Martin Luther published his Ninety-Five Theses and the budding Protestant Reformation interested the young philosophically minded courtiers, Anne included. This influence would shape Anne’s future, as it set the foundation to the upcoming changes in Henry VIII’s religious policies, instituting the break from Rome and beginning the Church of England.

Before joining the English court, her father, who was rising high in the King’s favor (thanks to his elder daughter), came home to ready for a visit from King Henry. Anne, pondering her dismal future as the wife of James Bulter, an Irish peer, is not impressed by the King and decides to play a trick on him when he happens upon her in the garden unannounced. She pretends to believe he is a gentleman of the court and proceeds to ridicule the court, comparing it to that of France. Thus both angered and fascinated, the King makes himself known and Anne deftly extricates herself by feigning her purpose to have been amusement, and not pretension.

Plaidy stages Anne to meet James Bulter at court, where he is much taken with her, but she is indifferent to him–mostly because she has no desire to live in Ireland. When it is announced that there is to be no betrothal, she is relieved and believes there must have been a change in policy which negated the alliance. Her chance meeting with Henry Percy, the heir to the Earl of Northumberland, was different in that she was drawn to him and both were enamored of the other. Their forced split and her subsequent dismissal from court was a low point in Anne’s young life and caused the coldness she felt toward men, especially the powerful Cardinal Wosley and the King (once she learned he was the cause).

As the first half of the book ends, Thomas Wyatt, a neighbor of Hever and childhood playmate of George and the Boleyn sisters, makes his feelings known to Anne. Though already married, he wished Anne to dally, but is much mistaken in his presumption that she will fall for his handsomeness, wit and flowery writing. Anne Boleyn will be no man’s mistress–and thus the chase begins for King Henry VIII…

Anne finally gave in to the fact that Henry would not stop pursuing her, and if she could not have the life she wanted with Henry Percy, heir to the Earl of Northumberland, she could at least be the highest lady in the land. Though she did not love the King, she couldn’t help feeling elated by his attentions, and the continuing attentions of the bright young men at court. Here the book goes into detail about “The King’s Secret Matter” and the steps he was taking to divorce Katharine. There were many political obstacles between Henry and his heart’s desire, such as the ever changing alliances with either France or Spain, as suited the needs of policy.

Wosley’s downfall precipitated Anne’s in that, for the first time, she lost a little of Henry’s regard when she gloated over the man’s demise. Though still infatuated with Anne, Cranmer and Cromwell were turning him onto the idea that the break with Rome was about power and wealth as much as his matrimonial affairs. His ever obliging conscience saw the need for reform only because it bolstered his own cause (and lined his pockets).

Anne let her guard down after Katharine was sent away and she was named Marquess of Pembroke. Politically, this was Henry’s way of making Anne “fit” to be presented at the upcoming meeting with the French king, as she wasn’t the queen. It served little, however, when the Queen of France (who was from Spain) refused to accompany the court–and thus only the men of the two countries were allowed their entertainments and political strategics. Anne, however, came away from this event with something in her favor–she was pregnant.

Henry finally thumbed his nose at the Pope and had his ministers declare his marriage to Katharine invalid. He and Anne had a small, quiet ceremony in January of 1533 and began planning for her coronation in May. This was a time of triumph for Anne, though it was to be short-lived. Before their daughter, the future Elizabeth I, was born, Henry’s eye was already roaming. There was an unnamed lady of the court who had caught the attention of the King, and Anne’s gossip hungry sister-in-law kept her informed of the affair. Anne, not known for keeping her temper, railed at the king and was quickly put in her place with the words, “You will close your eyes as your betters did before you.” This was the point where Anne found she had gambled much for Henry’s “love” and found it was not altogether as exciting as she’d once thought. She began to know the tyrant, and loathed him, but she was not ready to give up the fight for her place. She would swallow her pride and focus on bringing herself security in the form of a male heir.

It was not to be–she suffered several miscarriages and the old pattern Henry had experienced with Katharine began to emerge. With each, Anne lost a little more of Henry’s regard, and because he was tired of her he began to look for a way out of the marriage. Anne finally realized her efforts were futile, but still she played the meek wife in hopes of bonding their marriage and conceiving another child.

Meanwhile Henry met with Cromwell to devise a way to be rid of Anne. It is thought at first that he would divorce her as he did Katharine, but when Mark Smeaton and the men of the court were arrested, Anne saw that he desired a more permanent solution: treason and death. Until the end Anne was cool and level-headed, sending a letter that must have taunted him for the rest of his life:

“Commend me to His Majesty and tell him that he hath been ever constant in his career of advancing me; from private gentlewoman he made me a marquess; from marquess to a queen; and now he hath no higher honor of degree, he gives my innocency the crown of martyrdom.”

This characterization of Anne Boleyn is the most detailed and historically accurate fictional account this reader has encountered. It is the book I always recommend on the subject and one of my favorite novels of all time. Henry VIII’s complex personality is displayed magnificently, explaining his struggle of desire versus conscience. Anne is portrayed not as the calculated schemer and/or black-eyed witch of some embroidered fiction, but as a woman who was thrust into a tyrant’s world and made the best choices she could with what was presented and her own personality allowed.