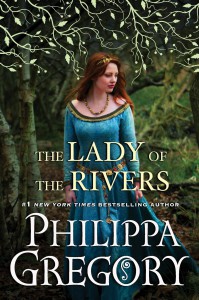 The Lady of the Rivers

The third installment of the Cousins’ War series, The Lady of the Rivers features a little known character at the forefront–Jacquetta of Luxembourg, mother of Edward IV’s queen, Elizabeth Woodville. Born the daughter of a French count and supposedly a descendant of the legendary goddess Melusina, she first married the Duke of Bedford, uncle to England’s King Henry VI. This marriage brought her wealth, power, education and an introduction to the dark arts. Though she is gifted with foresight, she doesn’t understand the vague visions that come to her and the few lessons her great-aunt taught her about fortunetelling and cursing remain nearly unused throughout the story.

Instead, we follow the court of the childlike Henry VI and his virago queen, Margaret of Anjou—who is so very clueless as to the proper running of England, that the reader has almost no sympathy at all for the Lancastrain cause. The Yorks do not seem much better, but at least young Edward IV realizes that allowing all noblemen a voice in Parliament keeps them from perpetual revolt.

Though there are many intriguing connections between Jacquetta’s foretelling and the events, none were a surprise to me—knowing this era well enough to memorize the timeline of battles and such, and having read Gregory’s previous novel on Elizabeth Woodville, I knew what to expect from Jacquetta.

However, I had hoped this one would have a more interesting take on the legend of Melusina. Instead we have a protagonist who is a little too good, not using her powers to her advantage at all. The endless procession of babies (fourteen of them with only one loss) and with Jacquetta’s non-stop tisk-tisking over the Queen’s behavior and playing the victim, well, made for a boring read. It started out great, building up from her privileged, though war-torn girlhood and marrying a duke who was not at all as he seems, and the beginnings of scrying and alchemy. When Margaret of Anjou stepped into the pages, it was like a complete standstill until the last pages when the Yorks finally win and Jacquetta watches her daughter go out to meet Edward IV, presumably about her dowry.

I realize that a lot of my ire is caused by the fact that I’ve read Susan Higginbotham’s novel about Margaret of Anjou, The Queen of Last Hopes, and her version features a strong and likable protagonist—nothing like Gregory’s representation. I can almost understand why no author has taken on Jacquetta’s character before—she may have been at the forefront of the action during the Wars of the Roses (or the Cousins’ Wars) but other than having a true love story with Richard Woodville, and giving birth to a daughter who would become Queen of England, she wasn’t uncommonly interesting. She could have been, had she used her powers, but Gregory chose to have her suppress them for fear of conviction–not from piety. Perhaps it plays up to the accusations that come later—premonitions of being tried for witchcraft.

All in all, the cover is beautiful, there are some interesting chapters and the usual atmospheric details are superb, but I was disappointed with this read due to the characterizations of Jacquetta and Margaret of Anjou. I feel that if she could have made their personalities at little more balanced, it would have greatly improved the story.

The Author’s Note states that Gregory’s next novel is based on the Neville girls—daughters of the Earl of Warwick, who marry Edward IV’s brothers, George and Richard. I’m interested to see how she writes Anne Neville’s kidnap and rescue, as well as her marriage to Richard III.