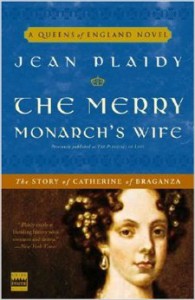 ‘But when I consider the truth of her heart Such an innocent passion, so kind, without art I fear I have wronged her, and hope she may be So full of true love to be jealous of me O, then ’tis I think no joys are above The pleasures of Love.’
Charles II

Convent bred Catherine of Braganza was not prepared for the shock of Charles II’s licentious court when she set sail to England to become his queen. Her romantic ideal was accurate, but for the fact that she wasn’t the only woman loved by King Charles. He loved and respected her, but he could not give up his other loves and did not hide the fact or make excuses. One of the reasons I admire him so much is for his honesty, wit and wisdom. Though she did not produce an heir, which would have greatly lessened their religious and political troubles, Charles stuck by her through plots and schemes, treason and murder. Though Charles II is my favorite British monarch, I wasn’t too excited to read about his wife because it is well known that she was not a happy woman — but I was proved wrong. She came to terms with his behavior early in the story and he became a very likable companion . They were able to share the nation’s troubles, which were plenty with plague, the Great Fire and the Popish Plot.

Even if you’ve read Jean Plaidy’s The Loves of Charles II : A Health Unto His Majesty, The Merry Monarch’s Wife is an interesting read. It goes further into the Catholic situation with the Duke of York and Titus Oates.