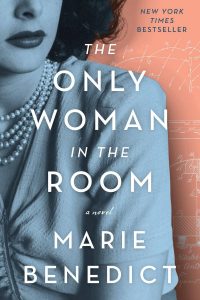 Today being Hedy Lamarr’s birthday, it seems an appropriate time to publish this review! The Only Woman in the Room by Marie Benedict was the pick for my book club last month and I found it a quick and enjoyable read. Although it is not greatly detailed on Hedy’s life as a Hollywood actress or as a budding scientist, these two roles are touched upon in the rushed second half of the novel. Mostly, it covers her exit from the Austrian theater and a volatile marriage with her first husband, Fredrich Mandl. The story should appeal to those interested in WWII fiction, however the real focal point of the book is Hedy’s personal journey as a woman striving to reveal her talents and pursuits rather than being defined by her pretty face. The Austrian political and social upheaval details are intriguing and give a necessary foundation to Hedy’s eventual pathway to her scientific endeavors, one of which was patented and later used when technology improved. The book’s title, The Only Woman in the Room, is a thematic reference to Hedy’s stage presence as well as her position as the sole female in her husband’s political and business meetings, and the military office that ultimately declined her invention and encouraged her to help the war effort by raising money with her celebrity status. This book works well as an introspective look at Hedy’s early life, and gives readers who research further an understanding you won’t find in a brief biography of this classic Hollywood actress.