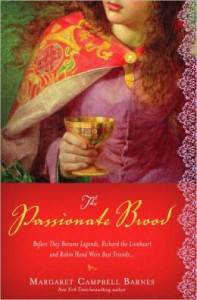 This is the story of King Richard I of England through an interesting perspective: the reputable legend–Robin Hood. Though he is not narrator or a main character by presence, he is the heart of the story and, one might say, Richard’s conscious.

Born on the same day, Richard and Robin were inseparable growing up, though Robin knew his place and never tried to elevate his status through his friendship with the royal family. He was a just and savvy helpmate, curbing the famous Plantagenet temper with a quick word or funny jibe.

When Richard inherited the throne of England, his short-sighted thoughts were of crusading, though England needed peace and prosperity. Robin saw this and his love for his country compelled him to stay behind and do whatever he was able to alleviate the unrest that assuredly came upon the departure of Richard and the ascendancy of his younger brother, John.

This is also the story of Richard and his wife, Berengaria of Navarre, and of Richard’s sister Johanna, who first married the King of Sicily and then Raymond VI of Toulouse. This part of the story was new to me and sparked an immediate interest in both women, of whom I hope to read more, fiction or non.

Though the psychological dynamics, the character’s personalities and the descriptive settings make a very engaging tale, I cannot overlook both the modernity of phrases used and the skewed timeline (of which I’ve noticed all of her novels contain). However, I found many noteworthy quotes and overall enjoyed reading a condensed version of Richard’s kingship.