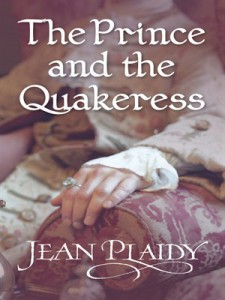 The Prince and the Quakeress

Fourth Book in the Georgian Saga

This is the story of the young George III, when he was not yet considered significant—only the eldest son of the Prince of Wales, Frederick, and grandson of King George II. If you’re not familiar with England’s King Georges’, you may find parts of the story hard to follow, as it alludes to characters from the previous books in the Georgian series, Queen in Waiting and Caroline the Queen.

Old King George II is in his winter years, bad tempered and constantly lamenting his deceased wife, Queen Caroline, whom he reveres more in death than he did in life. At the forefront is Frederick, Prince of Wales, his wife Augusta, and their “good friend” Lord Bute, a Scottish peer who sees his way up with this particular friendship.

Young George is malleable, honest and earnestly wishes to do well by his people. Lord Bute takes him under his wing, and begins to implant his designs in the young Prince, which are not considerably harmful to England, but are against the foreign policy and empire expansion ideas of the leading man, William Pitt. As the story plays out politically, these events are touched on, while George’s love life is more closely focused on.

George’s loves include an extended affair with a beautiful Quaker girl, a flirtation with a silly society belle (and descendant of Charles II through his mistress, Louise de Kerouaille), and a proposed marriage with the German Princess his mother chose for him. As these three relationships form and shift, George’s own personality changes gradually, and by the end of the book he seems a great protagonist and ready to become an ideal King of England.

I found the mystery of the Quaker girl, as explained in the author’s note, to be one of the most interesting facets of the story, and a satisfying explanation as to the later depiction of George in the next in the series, The Third George.

“The story of George III and Hannah Lightfoot is admittedly one of the mysteries of history. No one can be absolutely certain of what took place. There are even some who declare that Hannah Lightfoot never existed. There is, in my opinion, too much evidence from various directions for this to be likely. I believe that Hannah Lightfoot not only lived but was the mistress of George III, as Prince of Wales. There is even a report that Queen Charlotte at one time believed that the King had made a previous marriage and insisted that a second marriage ceremony should take place between her and the King, and that this was done ‘under the colour of an evening’s entertainment’. There is also the Reynolds portrait at Knole. I have based my findings on the available evidence and the character of the King; and I think my version has a good chance of being the true one as any other. J.P.”

With Plaidy’s signature style of including back stories on the supporting characters, this is one of her more intriguing novels. The Quaker mystery has a romantic suspense feel–very much like the author’s Victoria Holt titles. I greatly enjoyed this look at one of my favorite eras!