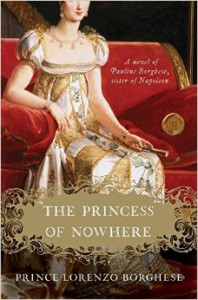 The Princess of Nowhere
by Prince Lorenzo Borghese

Pauline Bonaparte Borghese, sister of Napoleon Bonaparte and wife of Prince Camillo Borghese, is introduced to us as a vain and frivolous creature who is free with her favors and unconcerned with the consequences of her actions. We see the royal Italian couple through the eyes of Sophie, a young ward placed in her household by the emperor and partly through the other main characters: Pauline and Camillo. Sophie is, at first, only a showpiece to Pauline; an ornament when she wants to appear motherly. But, as she matures, Pauline finds in her a sometimes companion, mostly useful when Pauline needs to wheedle something from her husband or brother.

Pauline isn’t entirely heartless–she loves her son, Dermide, dearly and shows kindness and love to those around her when she is happy. Though she will go to great lengths to acquire her selfish desires, she became much more likable as the years (and her lifestyle) took a toll on her health and beauty. Once the most attractive woman in Europe, the loss of that allurement striped away the unsavory aspects of Pauline’s personality and left a vulnerable woman who finally realized what she had lost through her vagarious nature.

I’m not a fan of flashback scenes as opening chapters–they rarely make sense because the characters are not known to the reader and, for me, the significance is lost until I go back later and re-read it. And so, I was thoroughly confused with the starting of the story in 1804 (Prelude) and the next chapter 1845 (Prologue) and then going back to 1803 for Chapter 1. However, I do believe the split POV was a good choice, because Pauline, from either her own perspective or husband’s would have been even more detestable. But with Sophie, who greatly admired Pauline to a point, we were able to understand her a little better.

The title, The Princess of Nowhere, makes little sense until near the end of the book, where we learn of Pauline’s later life. Marketing plays a large role in the naming of books, choosing titles based on what they believe will be sellable. The title of this book suggests a landscape theme–a political struggle, which those familiar with the Napoleonic wars know her brother was obsessed with conquering and placing his many siblings in positions of power. This story, however, is not really about her titles and possessions (of which she had a great many) but more about her promiscuous personality and emotional state. Nonetheless, a ‘royal’ word was inserted, as seems to be the norm for most historical novels these days.

The high rating I gave this read is for the eloquent, though modern-ish, writing style and interesting characterization. I noticed some reviewers didn’t like the sex scenes depicted, but you must keep two things in mind: the author is male, and rarely can a man write on the same wavelength as a woman when it comes to bedroom scenes, and secondly, Pauline was a very sensual woman–not describing this would have been historically inaccurate. It didn’t phase me, even with my dislike of romance/erotic novels, so it can’t be that bad. I guess it helps that it’s straight-forward and not mushy or flowery.

This novel is very well-written and highly readable. Astonishingly, I read it in little more than 2 sittings (a rare event for me). Though it is not a politically detailed story one might expect from a Bonaparte novelization, the descriptions transport the reader to the time and place. Normally a modern feel to a historical novel dims the enjoyment, but with this book I found it refreshing and entertaining. I’ve been inspired to buy Flora Fraser’s biography, Pauline Bonaparte: Venus of Empire and any novel that incites further research into a ‘character’ has proven its purpose.