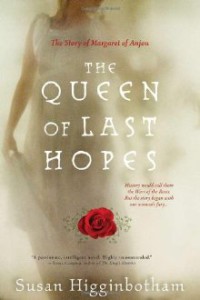 The Queen of Last Hopes

Shakespeare is just one of the sources that has maligned Margaret of Anjou throughout history, and so we have a very interesting protagonist in The Queen of Last Hopes. Margaret, well-educated and prepared to do her duty, came from a happy home and was not aware of what awaited her in England. As a direct result of the Hundred Years War, she was met with sour faces and grumbling from her new subjects, and was never accepted into their hearts as their Queen. The people’s attitude coupled with Margaret’s fondness for certain noblemen over others created just the atmosphere the Duke of York, heir to the throne, needed to stake his claim when Henry VI was mentally unfit to rule.

However, there is the question of Henry and Margaret’s heir: Prince Edward. As the royal couple was childless for 8 years and he was conceived mere months before Henry VI’s first illness, rumor had it that he was a “cuckoo” in the royal nest. Many disagreements and battles ensued, and Edward grew up in an uncertain world where his father was a sometimes King and his mother was working endlessly for his inheritance. As told by Margaret and her adherents, this is the story of that complicated time period called The Wars of the Roses in a style very sympathetic to the Lancastrian cause.

I have read many novels set during The Wars of the Roses and am still confused with names, titles, battles, etc. This book, however, leaves events in order (no flashbacks or foreshadowing) with names and dates displayed at the head of each chapter, so it’s much easier to keep the facts straight and mentally file them away without taking from the story line.

Of all of Susan Higginbotham’s historical novels, this is my favorite. I’m pleased with the historical accuracy, realistic characterizations (though, admittedly congenial) and the ending–I cannot tell you how many times an ending has ruined a book for me. Luckily, the author did not use Shakespeare as a “source” as he has Margaret (1) stabbing the Duke of York and (2) in England at the end of her life, when she was actually ransomed back to France. I’ve not actually read Henry VI by Shakespeare, but there is some good info here, where I found the quote.

Add this one to your wishlists and TBR piles–it’s a good one!