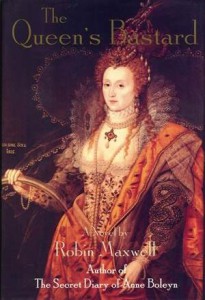 One of the great rumors surrounding Queen Elizabeth I is whether or not she had a bastard child or children. There have been several books written on the subject and many theories abound, including the historical figures Edward de Vere, William Shakespeare and one Arthur Dudley, who was notated in Philip, the King of Spain’s state papers. Robin Maxwell takes the character of Arthur and forms a very plausible and adventurous story of his life.

The masculine details in this book are so genuine and authentic. I’m always amazed when an author of the opposite gender can so deftly relay the thoughts, feelings and mannerisms of the said character. There are minute details of animal husbandry and manege (the art of training horses), a task that Arthur excels in, much like his birth father – the Queen’s Master of the Horse.

I’m beginning to see Elizabeth with a new respect because of this author. I have loved reading her quartet: Virgin: A Prelude to the Throne, The Secret Diary of Anne Boleyn, The Queen’s Bastard and The Wild Irish. In fact, of all the books I’ve read on Elizabeth, Maxwell’s are among my favorites. She just has a way of making her human and likable. She has her faults, but she’s also unmistakably regal and wise.

I think my aversion to Elizabeth started with Philippa Gregory’s books on her: The Queen’s Fool, in which she was the scheming younger sister of Queen Mary, The Virgin’s Lover, where she was depicted as a foolish girl who couldn’t control her own actions, and finally in The Other Queen, set opposite Mary, Queen of Scots, and which uses Cecil as the ‘real’ power behind the throne, as he sends secret instructions out and does his scheming without the Queen’s knowledge in many cases. Jean Plaidy’s version is more loyal to historical fact, but makes her out to be an ‘ice queen’, especially in My Enemy the Queen (the later years of Elizabeth). Hands down Robin Maxwell wins when it comes to making a fair and interesting characterization of Queen Elizabeth I.