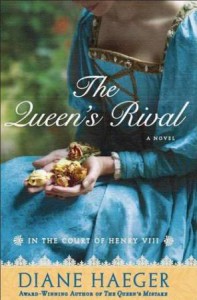 Bess Blount is well-known as Henry VIII’s first official mistress, but few novels have delved into the details of her life. This story begins with the blue-eyed, blonde beauty as a young teen on her way to court. There she befriends Elizabeth Bryan and Gil Tailbois, and begins a fascination for the young king. Over time, even as she witnesses more than one young lady fall from grace, losing reputation and place, she nonetheless finds herself entirely under King Henry’s spell, and ultimately she becomes his lover.

Tudor enthusiasts know the story of Henry VIII’s amorous affairs well enough to know that Bess is eventually discarded by the monarch, but what happened to her after she left court? This is the story of her life, richly detailed and brimming with endearing characterizations—but also with obligatory strife and antagonists. There are skewed facts and timelines, but these are arranged to compliment the author’s need to push the story along.

This is a great addition to the Tudor novel genre, as it is based on a little known character, but one who was surrounded by intrigue and most likely privy to plots, especially those involving her son by the king, Henry, Duke of Richmond. While some theories I have heard before, there are new ones as seen through the eyes of the mother of the only recognized son born to Henry during his first two marriages. Even if Bess does not captivate the reader—as she can seem immensely blind to the obvious at times—this is a multi-faceted story that will appeal to readers of Susan Holloway Scott, Kate Emerson and Sandra Byrd.

If you enjoy this novel, I recommend Courtesan by Diane Haeger—I read it years ago and the story is still with me and I always look on the character favorably, even when other authors use her as an adversary. Such is the power of first impressions!