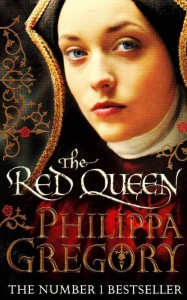 This highly anticipated second novel of the Wars of the Roses from Philippa Gregory, though perhaps not sensational, definitely does not disappoint in terms of intrigue, timelines and historical detail. Gregory’s Margaret Beaufort begins life having visions of Joan of Arc and so dedicates her life to what she believes is her calling. At first she feels her destiny lies in prayer and study, but after the birth of her son she focuses solely on his care and upbringing.

Unfortunately (yet ultimately fortunately) she must hand him over to wardship all of his young life and so never forms a maternal bond with him. She does, however, manage to instill in him a sense of family pride–namely their Lancastrian ancestry.

This novel covers Margaret from a young girl, through three political marriages, to Henry’s triumphant moment at the Battle of Bosworth. The political scheming is intriguing, however I feel this novel falls short of The White Queen in regards to the mystical elements. The legend of Melusina was such an interesting fit with Elizabeth Woodville, but the Joan of Arc parallel doesn’t have the same appeal for me (perhaps because of the overly religious theme).

Margaret married three completely different men and each bring something to her, though she would grudgingly admit this. Edmund Tudor gave her the loyalty of Wales, Henry Stafford kept her (and her son, Henry) safe through the early Wars of the Roses–though she viewed him as a coward for not taking sides, and Thomas Stanley brought her tremendous political advantages, as he used duplicity to be on the winning side of every situation. The details of her marriages make this book worth the read for me, as I have never read about her early life and the role she played while the country was entrenched in civil war for decades.

I wasn’t thrilled with the ending. After being put under house arrest by Richard III and visited by a wily Elizabeth of York, I had hoped to see a little bit of triumph over her ‘enemies’. I put the word in quotation because by the end of the book I was almost wholeheartedly against her–not against Lancaster–but Margaret Beaufort, who was slightly fanatical, way too righteous and hypocritically pious.

Another flaw that I am sure the reviewers who tend toward the negative will point out is the repetitive, overly simplified prose. It’s mostly noticeable in the beginning and so I chalked it up to the character’s youth, though I picked out sentences that could have been phrased better throughout the book. Yet for each one there was a cleverly worded exchange, and so it evens out; not spectacular, but not atrocious either.

I never got emotionally attached to the protagonist, and for me that is a must–even though I recognize the fact that not all novels can (or should be) the same regarding the narrator’s disposition. The unremarkable prose and unsatisfying ending make this an interesting but mediocre read for me.